THE WAYANA INDIGENOUS PEOPLE OF SURINAME

We are the Wayana Indigenous Peoples of Suriname. We are the traditional custodians of our land and we pay our respects to our Elders, both past and present. We acknowledge and respect our continuing culture and the contribution we make to the environment of our territory.

The Wayana occupy a large area in the northern Amazon Region, which now covers Suriname, French Guiana and Brazil. In Suriname, the Wayana live and have lived on the shores of the Lawa, Litani, Oelemari, and upper Tapanahoni Rivers. We arrived there from Brazil around the mid-18th century and only settled in Apetina (Puleowime), Palumeu and Kawemhakan (Anapaike) at a time when the Ndyuka and Aluku Maroons had already settled along the Tapanahoni and Lawa rivers respectively.

Relatives of the Wayana who are living in Kawemhakan nowadays, were threatened by the Kari’na and the Wayãpí Indigenous tribes in the mid-18th century. A subgroup of Wayana traveled north, led by the legendary Yapoto Kailawa, who is still perceived as the father and founder of the Wayana nation. Kailawa led his multiethnic Wayana-group along the Jari and Paru Rivers in North-East Brazil and across the Tumucumaque mountains.

After a series of wars, the Wayana, decimated in numbers, settled around the Litani, Lawa and Palumeu rivers. The Wayana group emphasized its new identity with oral histories about a shared past and ritual fests to strengthen its community, and a shared future. By the first half of the 20th century, diseases introduced by Western settlers led to rapid decreases in population numbers. In the 1960s, the lives and culture of the Surinamese Wayana were strongly affected by governmental efforts to open up the interior to Baptist missionary activity. As the Wayana went to live in larger population centers, they experienced better health care, higher life expectancy, education, and a higher literacy rate. On the down-side, however, acculturation has caused dependency on outside manufactured goods, the loss of traditional cultural and ecological knowledge, and the over-extraction of selected natural resources.

Suriname is the home of an estimated 800 people of Wayana descent. In the three countries that are home to the Wayana, there is an estimated population of 2500 Wayana people. There are elementary schools in Palumeu and Puleowime (Apetina). Most children from Kawemhakan (Anapaike) go to elementary school in French Guiana. However, few of them are allowed to attend high-school there. Wayana children have virtually no options for continuing their education at a Surinamese high school or technical training center. Opportunities for adult education, skills training or alternative forms of educations are practically nonexistent. The children grow up with one language, Wayana and may learn a little Dutch or French when, and if, they go to school. Few Wayana speak Dutch, the official language of Suriname, and men are more likely to do so than women. Also, relatively more men speak the lingua franca, Sranantongo.

In addition, some ceremonial languages are spoken. Even though access to education is limited, the majority of Wayana men and women are literate. Wayana men and women from the Lawa region have, on average, received more years of formal education than Wayana from the Tapanahoni region. Today, almost all Wayana are Baptist and this religion is a dominant factor in social and cultural life. As a result, traditional dances, songs, stories, cosmology, and other cultural expressions are rarely practiced and unknown to most Wayana children. Some shamans are still active as healers, but they no longer publicly perform rituals involving their connection with the spirit world.

The French and Brazilian governments have had some cultural preservation projects in the Wayana villages, but unfortunately nothing of a sustainable nature. The elders still possess ancient and traditional knowledge, but this knowledge is fading quickly. As the possibility of losing this knowledge rises, it is very important that we record these tales and stories as soon as possible, so that we preserve it for generations to come. Luckily, in recent years we have become more aware of the value of our cultural heritage.

FPIC and Engagement Protocol; how to work with the Wayana Indigenous

The Wayana Indigenous Peoples have never been colonized, as all its communities are located in the remote and dense areas of the Northern Amazon region of South America. The Wayana are proudly indigenous, and fought many wars with other Indigenous tribes, not even that long ago, to defend and conquer the territories in which they still live today.

The Wayana are a curious people and always want to get acquainted with other people, communities, and cultures. However, we demand respect; nobody possesses the right to tell us what we must do, or how to live our lives. We make our own decisions on our own terms.

Many, especially conservation organizations, have in recent years tried to convince us to live our lives differently. From our side, the response has always been: why? We have lived in our territories for many centuries, and possess all the traditional knowledge about our forest, animals, and nature. This leaves us to wonder: who are you to tell us what we should do? The forest still exists today thanks to us, WE are the forest!

It is true; we strive for development, but NOTHING ABOUT US, WITHOUT US! We want partners, not colonizers. As such, we have developed our own engagement protocol, based on the UN Indigenous right and FPIC guidelines: the Wayana Consultation Protocol. If organizations want to work with us, simply respect our rights, and we can become friends for many years to come. 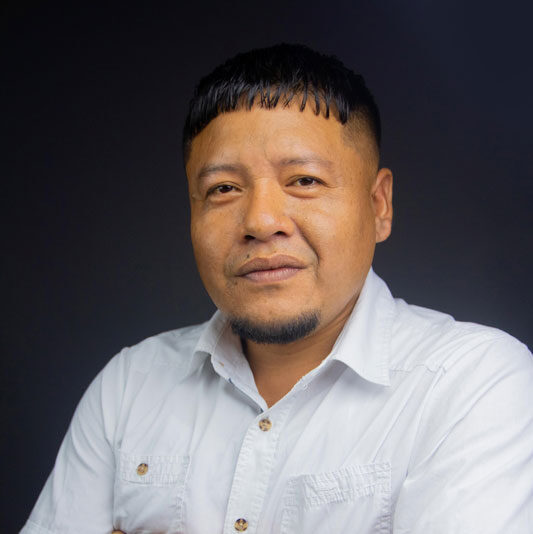